Manchester is constantly developing, improving its appeal. The city has loads to offer, including an alternative scene, great drinking venues and also great food dives!

Being one of the UK’s largest urban areas and it being home to two of the country’s best football teams, Manchester has long been a popular city for shopping, nights out, music, sport and more!.

It’s also one heck of a city to visit for a Manchester stag do, with plenty to keep you occupied both day and night. No longer does it have the dull, industrial city tag that blighted the town decades ago, instead Manchester is now rightly considered as bright and inviting city to those who visit. There are many places to eat, things to do and of course, a nightlife scene that spans over many different areas of the city or ‘quarters’ as they’re known as. Each offering something different, you’ll never be feeling out of place in Manchester. Complete with its pocket-pleasing Northern prices, the city becomes a hotspot for a weekend away. 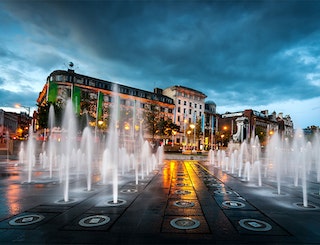 Despite it being a large city, you’ll find that venturing around Manchester is actually a lot easier than it can be in some cities. This is mainly due to the city’s great tram network. You’ll also be able to get around the city centre on the Metro shuttle bus. If you travel to Manchester by train, you can jump on the free bus from the station as route one starts from Manchester Piccadilly. In a similar way to most cities, taxis are probably your best mode of transport to help you get around on your night out. Having said this, most public transport services do run late.

If you’re searching for a stag do location that is brimming with fantastic activities and buzzing nightlife, then Manchester could be the perfect place for you! The city is home to some of the most popular classic stag do activities like Paintballing and Go-Karting.

Football reigns supreme in the North West and whether you head to the Theatre of Dreams, Old Trafford, or where the Blue Moon has risen, The Etihad, you can get ticket packages from us. If you’d rather play a football inspired activity, then you and the lads could always book either Bubble Football or Footdarts.

If you’re feeling peckish and in the mood for a delicious, reasonably priced Chinese feast, then you should head to Manchester’s very own Chinatown. There’s also the famous Curry Mile which is located just outside of the city centre. Here you’ll find the largest concentration of Indian, Pakistani, Sri Lankan and Bangladeshi food. With more than 70 restaurants in one area, you’ll be overwhelmed by the choices and the neon lights.

You’ll find that there’s truly something for everyone to enjoy on a Manchester stag weekend. You might decide to spend your evening in the vibrant Printworks area or head over to the quirky Northern Quarter. Whatever you want, the lovable Mancs have got it all! If you’re feeling a little overwhelmed with the sheer amount of choice, then don’t worry, we’re here to help. Why not start your evening by lining your stomachs with a delicious meal at a restaurant followed by heading to a bar for a few drinks before finishing your night at one of Manchester’s vibrant nightclubs? We’d be more than happy to organise this for you which means that all you’ll have to do is turn up and enjoy!

In light of COVID-19 we are providing further flexibility to booking your stag do!

There’s never been a better time to have a Stag to look forward to!