The best place to party in the Canaries!

Tenerife is in the Canary Islands and benefits from the incredible weather. It is a popular destination and you won't be found wanting for everything you need on a stag weekend abroad.

We’ve got loads of awesome stag packages to choose from including 2-3 night stays in addition to activity only packages ideal for those who would prefer to sort out their own accommodation. We recommend our Tenerife VIP Beach Club package for those who prefer doing things in style, where for you’ll enjoy 3 nights on this incredible party island. You and the guys will hop on board a private yacht, partake in an awesome VIP party night in addition to a visit to a sizzling hot lap dancing club and experience a sophisticated beach club bar full of classy interiors and chilled vibes. We’ll also throw in return airport transfers and accommodation for 3 nights. If 2 nights is more your thing then take advantage of Rump and Grind package, where you’ll get your accommodation in addition to a sexy strip steak dinner and VIP night of partying.

If you’re searching for a stag destination with year round warmth and a massive party scene, then you’re in for a treat with Tenerife. There’s a whole host of amazing bars and clubs that you and the guys can visit whilst you’re here with some fantastic drink deals, in addition to a colossal range of thrilling daytime activities. You can even work off your chronic hangover in the sunshine on a sandy beach….if you still need convincing, then there’s some awesome waterparks with a whole host of immense slides and rides to get your heart pumping! Do the stag do the right way, on a stag weekend in Tenerife! 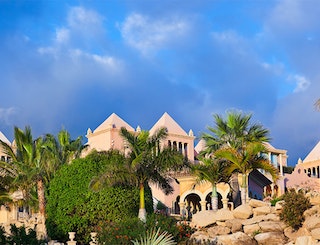 If one of the stag pack is okay with not drinking, we recommend getting a hire car to explore the island by day, however there are other various other ways of getting around the island if not. There’s a frequent bus service – however, we say it’s worth purchasing a Bono Bus Ticket which will lower the price of each trip by around 50% for journeys over 20km and 30% for journeys under 20km. You can get these tickets from bus stations, terminals and various retail outlets.

There’s also a tram service which operates around Santa Cruz or just good old fashioned walking – there’s plenty scenic walks you can take around the island on your Tenerife stag weekend. Alternatively if you’ve got a bit more cash to splash, there are taxis readily available to get you to your destination or take you home after you’ve stumbled out of those clubs!

Don’t forget, we’re happy to organise transfers to and from your accommodation so you have more time to sunbathe with a beer!

If you’ve got some spare time in between your Tenerife stag do activities, then there are plenty of things to do whilst on the Island, including many tourist attractions. Visiting Tenerife’s volcano Mount Teide is an absolute must whilst you’re here, and you’ll literally have your head above the clouds as you make your way up this UNESCO World Heritage Site. Take in the breath-taking views via a bus tour, or rent a car and drive up the winding roads. You can then take a cable car right up to the top (some 3,718 metres up). This is perfect for a bit of male bonding but most probably one to avoid if you’re hanging from the night before!

As for beaches, there’s plenty to choose from; Tenerife spent quite a bit transforming its rocky coastline into a sandy paradise for locals and tourists alike, so it’s certainly worthwhile catching some rays during your stay! We suggest checking out Troya beach in Playa de las Américas, which is ideal for groups of stags. Here, you’ll find golden sands and turquoise waters, and there’s loads of sunbeds available in addition to a great variety of water sports. The promenade is also packed with copious amounts of bars and places to eat, so you won’t be too far from a tasty snack. Do bear in mind that this particular beach gets packed pretty quickly, so it makes sense to head down as early as you can.

If the heat gets a bit too much for you, then why not combine cooling down with a trip to a water park? Siam Park is Tenerife’s premier water park and is stuffed with waterslides of all manners, including the jaw dropping Tower of Power, where you’ll plunge down the almost vertical 29 metre drop and you’ll even slide through an aquarium! There’s also a great lazy river in which you can float around all day and also  an imitation beach where you can relax or catch some waves in the massive pool which has regular tidal wave sessions!

Playa de las Américas is the very heartbeat of Tenerife’s nightlife and there certainly won’t be a shortage of decent watering holes around these parts. In addition, there’s pumping clubs, which are open till the early hours. Head to the centre of the action, and you’ll find a massive array of bars and clubs at the complex located down the famous Veronicas Strip. If you’re looking for something a little more chilled, then Costa Adeje may be the place for you with a whole variety of great bars and restaurants.

We suggest taking advantage of our ultimate Tenerife stag party night option; we’ll equip you and the rest of the stags with information on the hottest bars in the area and you’ll all receive a shot each from four different bars, where you can party the night away. Perhaps you’d rather begin the evening with some tasty food before hitting the drink big time? If so, we can arrange for you and the guys to enjoy a delicious two course traditional meal, all washed down with a couple of beers. If you’d like to finish the night on a high, then we recommend our nightclub option; you and the stags will pay a visit to Tramps, one of the best house clubs in the Canary Isles. Once you step into this club, you’ll be greeted by an electric atmosphere, a sophisticated VIP area, a massive dance floor, 4 bars and some top tunes!