One of our many budget-friendly Eastern European stag destinations, Bratislava has plenty to offer and definitely won’t break the bank.

Why not check out our great selection of package deals for your upcoming stag weekend in Bratislava? There’s a whole load to choose from including our Bratislava Locked and Loaded Package. With this, you and the guys will get to enjoy the ultimate shooting experience in addition to an incredible bar crawl, where you’ll discover the best bars that Bratislava have to offer. We’ll also throw in your accommodation for 2 nights’ and return transfers. Alternatively, there’s the Bratislava Mud Wrestling Package for something a little different. Here, you’ll watch women as they get down and dirty and wrestle one another, plus, a guided bar crawl and a visit to a lap dancing club with accommodation too!

We’ll let Tony Stevenson, who went to Bratislava on a stag do with us recently, introduce the Slovakian capital: “Cracking time, the sun shone and the beer was cold and extremely cheap. All washed down by the local speciality of grapefruit shots!” We can’t promise anything with the weather of course, but we can promise the beer is always nice and cheap, and with our expert Bratislava stag planners, we can also promise you a cracking time.

This is a cultured city with a lot to see, not least the local ladies, who are renowned for being as beautiful as the architecture. Bratislava is also famed as one of the cheapest capital cities in mainland Europe, with a pint setting you back little more than 2 Euros on average. Factor in the stupidly reasonable flight prices from budget airlines and a Bratislava stag do will be kind on the wallet as well as the perfect send-off for the groom-to-be. Read on for our complete guide to a Bratislava stag weekend… 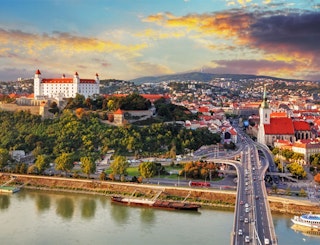 You can get to your Bratislava stag do with ease, as the Slovakian capital is well-served by budget airlines. The airport is about 20 minutes from the city centre by taxi or Uber. Bus is the cheapest option, but takes you to the main train station which is still a 15-minute walk or taxi from the centre.

We can arrange convenient airport transfers for your group, taking you right to the door of your Bratislava stag hotel with no fuss or waiting around. And we can do the same for any of your stag activities in Bratislava that require them because they’re out of town, such as White Water Rafting or Paintball.

Getting around Bratislava is simple, as almost all of the main sights, as well as the nightlife and restaurants, are within the compact Old Town or within a short walk of it. However, in the event that you do want to use public transport, you’re best off purchasing a 24 or 72-hour pass from a shop, coin-operated ticket machine or the tourist information office. The reason is that whether you’re going by bus or by tram, you pay by time rather than destination, so it can be a little confusing without an unlimited travel pass.

Taxis can be hailed on the street or found at one of many ranks around the city. They tend to be slightly cheaper when pre-booked. You can also use Uber in Bratislava.

Bratislava is a gorgeous city to walk around day or night, and as it’s such a tiny city it’s difficult to get lost! The architecture is a beguiling mix of ancient castles, palaces and churches, curious statues and Soviet monuments, so in the daytime we would definitely recommend just spending a few hours wandering around, getting your bearings and taking in the local way of life. Oh, and definitely pause for a beer now and again. At these prices you’d be bonkers not to. There are lots of outdoor cafes in the Old Town ideal for a cold one on a hot day.

One of our favourite landmarks in Bratislava is the UFO Bridge, so-called because of the alien-like cupola on top of this long hanging bridge across the Danube. There’s an observation deck offering superb views across the city, as well as a unique restaurant.

For sightseeing with a sexy twist, let us book you a Bratislava River Cruise with a stripper aboard. Although, to be honest most of your attention will be on her curves rather than the scenery. But no-one would judge you for that.

Naturally you can find all your classic stag do activities in Bratislava: Beer Bike Tours, Paintball, Shooting Ranges, Bubble Football, Quad Biking. But there’s also plenty of more unusual activities you can try too, from a session of Ice Hockey (all kit and training provided) to White Water Rafting, and even a Car Demolition experience. What’s that, you might ask? Well, exactly what it sounds like. A bunch of lads (that’s you), a car (a car), and a load of tools like crowbars, sledgehammers and baseball bats. Then you set to work smashing it to bits. Breaking stuff is hugely popular for stress relief, not that you’ll be at all stressed if you book your trip with us, as our expert stag planners handle all the logistics for you.

The nightlife in Bratislava is small but spicy, much of it centred around a handful of streets in the picturesque Old Town. Our stag do guide to going out in Bratislava shows you how to get your night off to the best possible start.

We can make things super-easy for you by organising your entire night according to your group’s interests. A Guided Bar Crawl, led by an attractive local lady, will show you around a selection of Bratislava’s liveliest drinking holes. We can also organise Casino sessions, VIP Club Entry, or Pre-Paid Lapdance Club Entry. Whatever your group’s in the mood for, let us arrange it and save you time and hassle.

A useful way to get a feel for Bratislava’s nightlife scene is by sharing a few drinks with the locals. Zbrojnos is a good bet, with an ace live music schedule and open ‘til 4am on weekends. Or you could settle in for a few pints at the massive Slovak Pub, the largest bar in Bratislava with its own keg room, and also its own farm from where it sources ingredients for the traditional Slovak dishes on the menu. This is our top recommendation for getting your evening underway.

The Dubliner is a popular Irish Pub where you know exactly what kind of ambience to expect, while the IceBar is the only one of its kind in Slovakia. You hire a warm coat and gloves and head in for a beer or a shot in the subzero temperatures, the entire interior of the bar made from crystal-clear ice. Another unusual and entertaining place to have a few drinks in Bratislava is VRBA. Specialising in craft beer and gin (not in the same glass, durr) the bar also has an awesome Virtual Reality set-up, so you can the guys can pop on the old helmets and go fight some zombies, ride rollercoasters or climb Mount Everest, without ever actually moving more than a few feet.

The Trafo Music Bar is one of the most popular nightclubs for stag and hen groups in Bratislava. Set in the underground of an 18th century palace, it offers great cocktails, international and local DJs, and an awesome party atmosphere.

Is Bratislava good for a stag do?

Bratislava is a bit of a hidden gem when it comes to stag do’s in Europe. It’s quite a new destination that has been flying under the radar until now, but we’re seeing more and more enquiries for Bratislava stag do’s recently. Why? Well, the crazy cheap beer prices certainly don’t hurt, nor the brilliant range of stag activities available to you. The Old Town, where much of the nightlife is located, is compact so easy to get around, and both hotels and flights are very reasonably priced too. Bratislava has got a lot going for it as a stag destination.

Where do your Bratislava stag do reviews come from?

You can trust our Bratislava stag do reviews. They’re sent independently through the Trustpilot website by previous customers. Across over 1,300 reviews of our stag do’s, we score an average of 9.6 out of 10. And if you’re booking with us, we’d love to hear how you get on after you’re back. Every review is useful for stag groups of the future.

We’d describe the Bratislava nightlife scene as small and spicy. Much of it is centred on the compact Old Town, where the pavements come alive on warm evenings. You’ll find quieter bars here where the locals like to drink, and rowdier places where you tend to find a more international crowd, and a thin but flourishing club scene too. The best way to get a night out started on your Bratislava stag weekend is with one of our guided bar crawls, led by a local lady, and showing you round some of the city’s top bars, perhaps finishing at either a nightclub or a gentlemen’s club.

Can we take a beer bike tour in Bratislava?

Beer Bike Tours in Bratislava are among our most popular stag do activities in the Slovakian capital. This is a great way to do some fun sightseeing, break the ice between the group if you don’t know each other well, and enjoy a few drinks at the same time. You’ll have a sober driver / guide showing you around, so all you and the boys have to do is keep on pedalling.

How much is a beer in Bratislava?

The beer in Bratislava is famously cheap. Expect to pay between 2 and 2.5 Euros for a pint. Bratislava is one of our top budget stag do destinations in Europe for this very reason.

Rated 4/5
Bratislava
16 stags doing bratislava, high street, Europe. Cracking time, the sun shone and the beer was cold and extremely cheap. All washed down by the local speciality of grapefruit shots! Great little ...